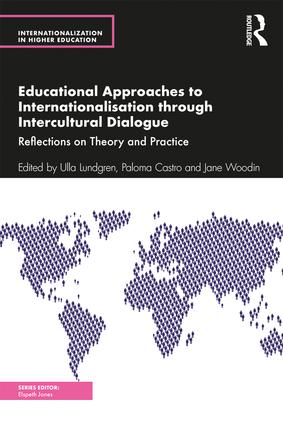 Addressing this important, under-discussed area of internationalization – the role of intercultural dialogue – this book provides theoretical reflections and applicable, practical case studies that focus on:

By taking a resolutely educational approach, this book links internationalization to what should be one of its main dimensions but is too often neglected: intercultural dialogue. Through a combination of theoretical chapters and case studies from a broad range of countries, the book demonstrates multiperspectivity, a concept developed through the Council of Europe’s history education program. It recognizes that we may learn from the experience of others, without falling into relativity or accepting that "anything goes". Internationalization should encourage multiperspectivity, and this book makes the case convincingly.

Sjur Bergan, Head of the Council of Europe’s Education Department

The chapters in this book demonstrate that intercultural dialogue stands at the heart of the effort to internationalize higher education.

The book is a valuable contribution to the field of internationalization and higher education and the role of intercultural dialogue in this endeavour.

Annually a member of the Association can be recognized for Outstanding Achievement in the field of Citizenship and Identity.  Each year at the Annual General Assembly the EC/Board of Director's announces the nomination of a distinguished member to be confirmed as the recipient of the award for the previous year.

We are honored to have the following person's recognized as the

Paula Cowan (University of the West of Scotland) 2014 Awardee

Henry Maitles (The University of the West of Scotland) 2020 Awardee

The book has been deemed essential reading for student teachers and recently qualified primary and secondary teachers, especially those with a specific responsibility for history, citizenship and religious education, and museum educators.

The Holocaust is a controversial and difficult teaching topic that needs to be approached sensitively and with an awareness of the complex and emotive issues involved. This book offers pragmatic pedagogical and classroom-based guidance for teachers on how to intelligently teach Holocaust education in a meaningful and age-appropriate way.

Praise for the book:

'This book makes a significant contribution to the development of education for a better world.'

'This book gives a closely argued analysis of the nature of the Holocaust, and why it is so important that young people continue to study it, react to it, learn from it – it is a work of theory that critically informs our ideas of the purposes of education.'

The University of the West of Scotland is hosting on the 13-16th of October 2016 the International Conference on Youth Futures "Insisting on the Indispensable".  The Keynote Speaker is Professor Henry A. Giroux who will be speaking on "Disposable Futures: The War on Youth in the Age of Spectacle".  Mark your calendars! 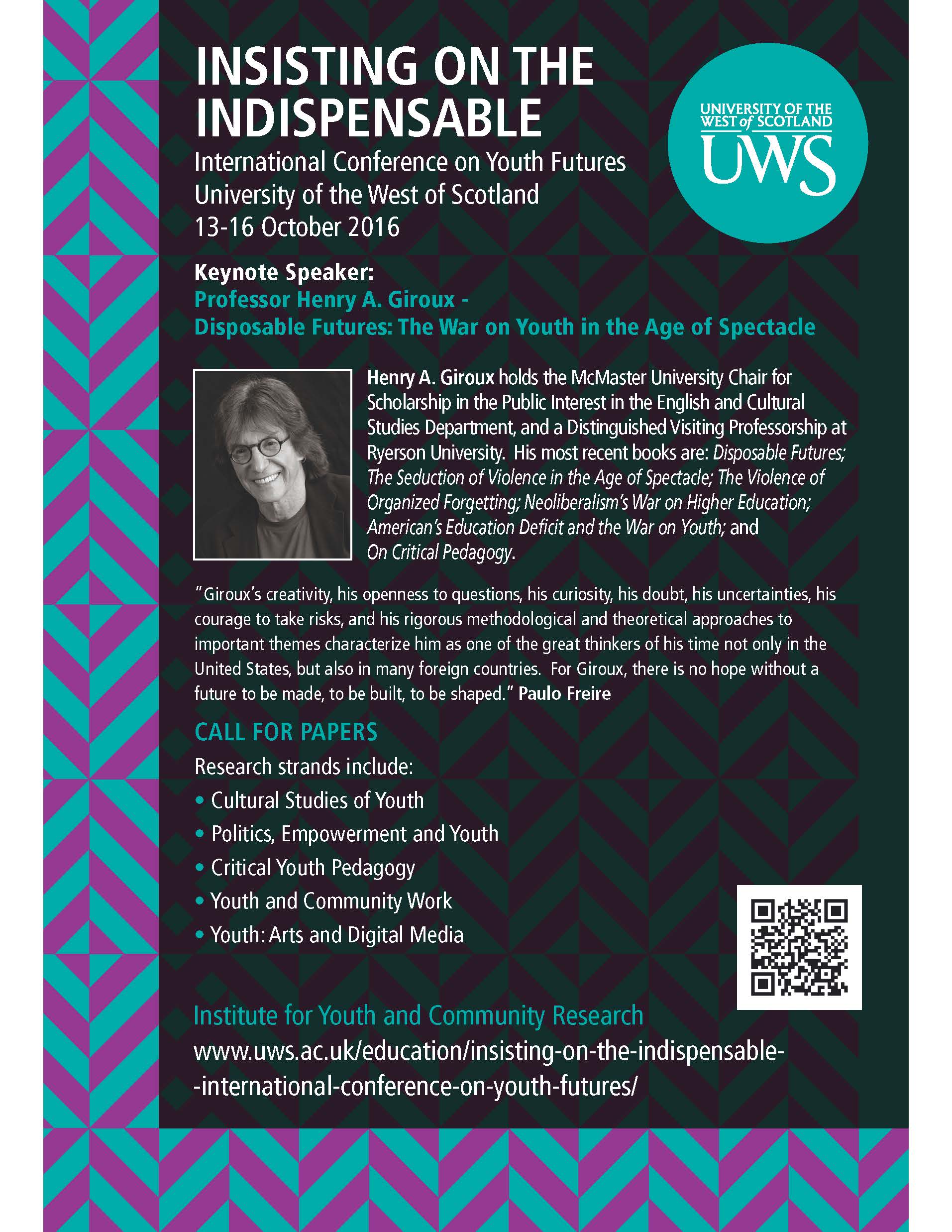 Facebook: As of September 2015 we are on Facebook - and we welcome everyone to come join us by giving the page a 'Like' √ the page at www.facebook.com/CiCeaEducation

Twitter: As of May 2014 we are on Twitter - it's a quick way to see what's happening with CiCea and retweets on issues related to children, identity and citizenship - come follow us at www.twitter.com/CiCeaNews 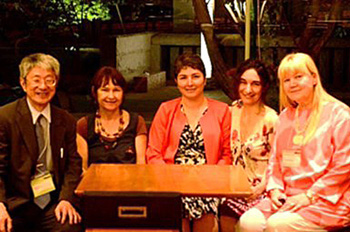 This year's CitizED conference took place in Tokyo, on 13-15 July, 2013 and was organized by the Hiroshima University in Japan. The conference’s theme was East and West in Citizenship Education: Encounters in Education for Diversity and Democracy. This theme was attractive to an international audience, including a delegates from both CiCe and CiCea. In the photo we see the chair of the conference, Prof. Norio Ikeno and four CiCea members: Marjanca Kuscer (Slovenia) Nilüfer Pembecioğlu (Turkey), Susana Gonçalves (Portugal) and Riita Korhonen (Finland). Riita gave a keynote lecture and the other colleagues presented their research in conference sessions.

Highlighted by several announcements, our Annual General Assembly meeting was held on June 14th in Lisbon. We announced the re-confirmation of Susana Gonçalves as Secretary General through September 2017.

Also on the agenda was the announcement of the Annual CiCea Outstanding Achievement Award which went to Ian Davies for his commitment as editor of the association’s journal Citizenship Teaching and Learning, and for his internationally recognized good work in the field of citizenship education. 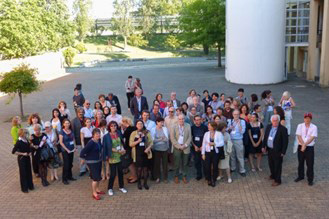 The Annual Executive Report was presented, proposed and seconded as was the Treasurer's Report. The "Executive Proposed and Approved Activities for 2013 were also outlined and approved. These activities focus on increasing the fundamental and applied research visibility of the Association. Among the activities was the establishment of a peer-reviewed online publication under the aegis of CiCea and to be located on the Association webpage, to which members can submit papers to be published. 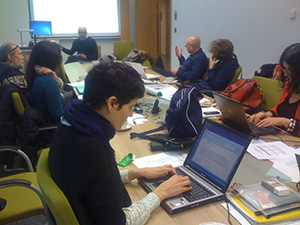 The winter meeting of the Executive Committee/Board of Directors/Charity Trustees was held in Ayr, Scotland at the University of the West of Scotland.

Among the agenda issues were: A research grant for 2014-2015 was discussed and agreed upon. It was agreed that next year’s Outstanding achievement award will be selected using a survey of the members.

The rebranding of the Association was discussed, including changing the name to broaden its remit and in particular its disciplinary focus. The possibility of printing a number of postcards using Susana Gonçalves' photos was discussed and it was agreed to produce a pack for sale at the conference that can be used as pedagogical tools for secondary students and undergraduates. The copyright and profit of the sales have been donated to CiCeA.

The winter meeting of the Executive Committee/Board of Directors/Charity Trustees was held in London in late January 2012.

After meeting and discussing potential individuals for the position of CiCea Treasurer, the Executive/Board of Directors/Charity Trustees nominated Christopher Gifford for he position.  Chris was elected to the Executive/Board/Charity and took office on October 1, 2011.  His nomination for the position of Treasurer was announced to the membership via email and an electronic virtual confirmation was initiated as had been decided at the AGA meeting in Dublin (June 2011).  The balloting was completed in 2011 and the confirmation of Chris Gifford to the post of treasurer was completed in early 2012. Chris was approved by 92.9% of the institutional members and by 89.7% of the individual members. His term in the Office of the Treasurer will run until September 30, 2016.

The original meeting venue was set for Vienna but venue scheduling made it necessary to change sites.  Thus, the autumn Executive Committee/Board of Directors/Charity Trustees meeting was once again held in Berlin.  Among the decisions reached at the meeting was the name of the person nominated for confirmation of Association Treasurer, Christopher Gifford, with electronic membership confirmation to follow.  Another decision was the restructuring of institutional rates into three bands 60, 250 and 480€  effective immediately whereas the individual rate restructuring is to take effect for 2012-2013 membership subscriptions.  These will be in four bands: 30, 50, 80 and 100€ dependent on salary.

The summer Executive Committee/Board of Directors/Charity Trustees meeting was held in Paris.  This was the last meeting as a member of the Board for Riitta Korhonen and Anne-Marie Van den Dries.  They were genuinely thanked for all their hard work on behalf of the Association.

Among the matters discussed was the nomination of a candidate for the position of Association Treasurer to replace Anne-Marie Van den Dries.  Several names were put forth and discussed.  The virtual election/confirmation was decided to take place after the next Executive Committee meeting.

The Associations Annual General Assembly meeting was held in Dublin Ireland on June 10, 2011. The Executive Committee/Board of Directors/Charity Trustee election results were announced: Three hundred and twenty-two votes were cast.  The three positions were filled by Marta Fulop, who was re-elected to the post of Scientific and Publications Officer and Christopher (Chris) Gifford and Beata Krywosz-Rynkiewicz who were elected to fill the other two positions on the Board of Directors/Charity Trustees.

Among the decisions taken at the meeting was the restructuring of membership fees to cover the cost of the Association journal, with no institutional membership being set at less than 60€. Among the activities approved included a) extending and developing the Association’s membership from other fields of research, b) defining different activities in  order to increase the fundamental & applied research visibility of the Association, c) surveying the membership on the types of specific research activities they  conduct  and/or are involved in related to the Association’s missions and d) promoting the establishment of regional and/or national CiCea affiliates and to  support the regional Citizenship Education conferences.

The Outstanding Publication Award 2010 was announced.  The awardee's were Maria Erikkson and Elisabet Näsman (University of Uppsala, Sweden) for their paper entitled ‘Interviews with Children Exposed to Violence’ (2010). Children & Society. doi: 10.1111/j.1099‐0860.2010.00322.x  While the first award for the Outstanding Contribution for the Association’s development and positive visibility was awarded to Alistair Ross (UK).

It was also decided a virtual meeting/confirmation would be held in the fall to fill the position of Association Treasurer becoming vacant at the end of Anne-Marie van den Dries term in office (September 30, 2011).

Elections were held to elect three (3) members to the Executive for the period October 2011 - September 30th, 2014.
Nominations opened on February 28th 2011. Nomination papers were attached for all members. If they wished to stand for office needed to

Nominations closed on March 31st 2011, and candidates who had met these requirements were included in the voting papers. Voting papers and candidates’ statements were sent electronically to all CiCea Members (Institutional Contacts and Individual Members) on April 11th. Members voted electronically on the papers provided. Voting closed on May 9th 2011. The outcome of the election were announced at the CiCe Association Annual General Assembly in Dublin in June 2011.

The research grant award 2010 was awarded jointly to Ulla Lundgren (Sweden),  Georges Cappelle (Belgium), and Gary Crippin (Turkey) for a study entitled ‘Collaborative Learning Around the World Regarding Global Citizenship Education: Possibilities and Prospects for Practice and Research through Web--‐ Based Social Networking’.

An electronic version of the thirteenth CiCea Newsletter (January - February 2011) was emailed to all members early in February 2011.

The Board of Directors/Charity Trustees held their autumn meeting in Berlin.  This was the first meeting for which Julie Spinthourakis served as President of the Association and Christine Roland-Levy as Past-President.

The Board of Director's/Charity Trustees held their June 17th-18th meeting in Warsaw.  This was the last meeting Alistair Ross served as Past-President.  At the meeting the Outstanding Publication Awards rules and regulations were discussed and voted upon.

As reported at the AGA, the Association has achieved record membership this year - fifteen new members were recruited in Barcelona. We now have over 110 individual members, and over 40 institutional members. President-elect Julia Spinthourakis has set a target of increasing membership in all categories during her tenure. Increasing membership means more member benefits - more travel grants, more research grants.

Nominations were opened in February 2010 for presidential candidates. One candidate was put forth.  Nanny Hartsmar was confirmed by the membership and will begin her term in office on October 1, 2010 as CiCea President-elect. On October 1, 2012 she will assume the office of CiCea President when Julia Spinthourakis will complete her 2 year term as President.

The Association has launched eight European Research Centres. Members have the exclusive use of these Centres for individual study/research purposes, or for research group meetings. The Universities providing the Centres make meeting rooms, internet access and library facilities available, and can provide details of possible local hotels, etc. They may also facilitate access to schools and educational institutions for research purposes. For more details, go to the Activities page or directly to the relevant article.

Research Centers are to be located in Malmo, Ankara, Patras, Reims, London, Coimbra, Budapest and Olsztyn.

The next issues of our journal will be the first to be printed and published by the academic publishers Intellect. The issue will be launched in July 2010. Members of the Association will continue to receive the Journal, which will aslo be available commercially from Intellect. Ian Davies will continue to act as Editor.